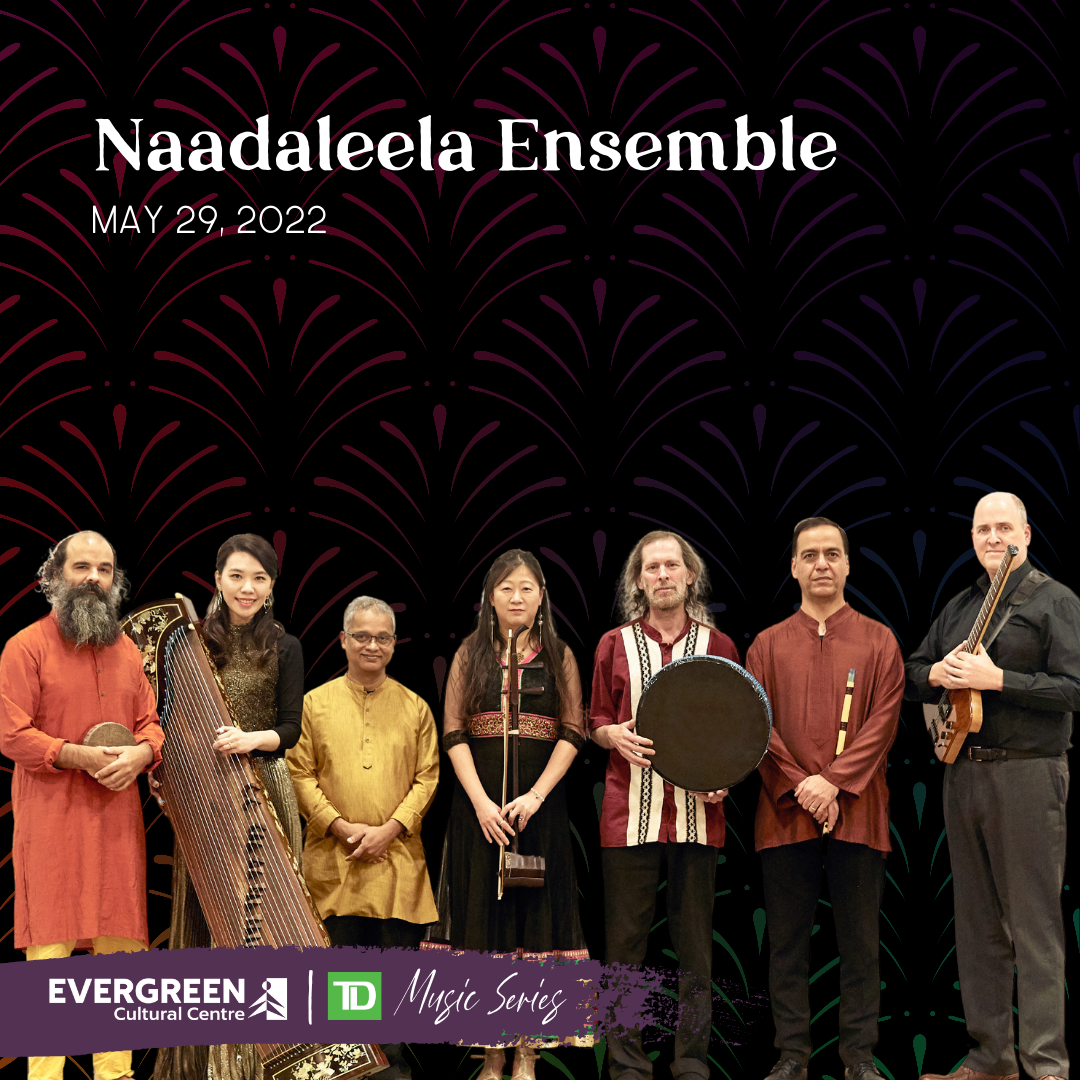 The Naadaleela Ensemble comes to Evergreen Cultural Centre to create a musical conversation between ancient cultures that span the Silk Road – from Iran to India and China – and which have been influencing each other for over 2,000 years. Even though the group represents some of the largest cultural communities in BC, very few projects feature such collaborations. Drawing on their training across a range of musical disciplines, the musicians reach into and across lines of difference, fusing together influences of South Indian, Chinese, Persian, Taiwanese, Indonesian, western classical, contemporary music, and jazz. The result is a heady and aromatic offering.

In this concert, you will hear a mixture of original music composed by the members of the ensemble. Musical and poetic strains dating from the Vedic period in India (1500 BCE) mixed with music that was composed in 2021. Instruments that were never conceived of playing together make beautiful harmony, such as the Chinese zheng and the South Indian mridangam supporting the poetry of Sufi poet Rumi; or the Persian ney and Chinese erhu complementing the South Indian voice. Expect ornamented melodies, soothing and invigorating rhythms, and songs that will move you, make you wonder, and leave you smiling.

ABOUT THE ENSEMBLE
The Naadaleela Ensemble was born out a of desire to explore the common (and not-so-common) musical ground between the the music of the “Eastern” world. The group’s name is drawn from two Sanskrit words, “naada” meaning sound and “leela” meaning play. Featuring acclaimed musicians from Iran, South India, Taiwan and North America, the sounds of Persian and Indian classical music meet with those of China, tempered with a tinge of North American jazz aesthetics. The group creates new musical works and explorations from its members as well as arrange existing repertoire from their various cultural backgrounds, taking the listener on a fascinating musical journey. The ensemble features Persian ney player Amir Eslami, Carnatic musicians Vidyasagar Vankayala (voice) and Curtis Andrews (mridangam), jazz guitarist Jared Burrows, and members of the adventurous Orchid Ensemble (Lan Tung-erhu, Dailin Hseih-zheng, Jonathan Bernard-percussion).

SINGLE TICKETS ON SALE NOW
Our studio theatre is officially back to full capacity in 2022! Proof of Vaccination is required for all persons visiting Evergreen – including staff, volunteers, artists, and our audiences. Learn more here.