Coquitlam is home to one of Canada’s largest Korean communities. As such, it’s also one of the best places in B.C. to order authentic Korean food.

When you picture Korean cuisine, what springs to mind? For some, it involves kimchi, the traditional dish. Others may think of Korean barbecue or a hot bowl of bibimbap. Yes, to all of the above. And there’s also another specialty that you’ll certainly want to try: Korean-style fried chicken. It’s crunchy, delicious and full of flavours and spices.

Let’s start with kimchi. This traditional Korean staple actually has more than 500 different types, says Kim, “and it is by far the most popular dish in Korea.”

“Almost all Korean restaurants across the world serve this dish,” he explained. “Kimchi is one of the healthiest foods in the world. It contains lactic acid bacteria, a bacterium that helps with digestion and fights harmful bacteria. Kimchi also boosts the immune system. That being said, the kimchi hotpot is the real deal.”

More on that below…

Here are three popular Korean dishes to try, as recommended by Kim. 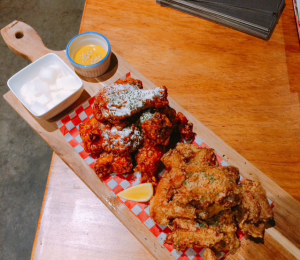 Oz Korean is known for its Korean-style fried chicken. A popular option is the Bhan-Bhan (meaning “half and half”), with half being the original fried chicken and the other half marinated or seasoned with sweet chili sauce, for example.

‘Snowing’ is also a big hit, both in Korea and Coquitlam.

“It looks like a snow mountain built up with fried chicken and tossed with variety of cheese powder and another our secret powder on top of the fried chicken,” said Kim. 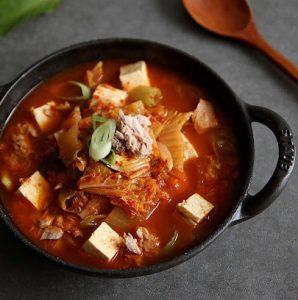 “Kimchi appears in many forms and is one of the oldest but still the most lovable hotpot amongst Koreans,” said Kim.

“Kimchi Jjigae does not contain a variety of other seasonal green vegetables like other hotpots but the beauty of kimchi alone can stand against them. Not only it is delicious, but it strongly helps our body with dietary and detoxication.” 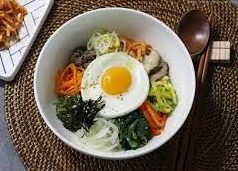 Bibimbap, literally meaning “mixed rice,” is one of the most well known Korean dishes. It is heart-warming, healthy and nourishing. While it contains many spring vegetables and a meat that can be different from restaurant to restaurant, the basics remain the same, including a fried egg (or raw, if you prefer) on top of all ingredients in a single bowl.

How and where to order Korean food

Oz Korean Cuisine is offering takeout and delivery through companies including UberEats, Fantuan and Foodly. For even more Korean food options, check out this food blog from Miss 604.

For more food options, check out Visit Coquitlam’s growing list of restaurants to choose from throughout Coquitlam – or drill down your options on the food map at visitcoquitlam.ca/eat-drink.

Stay tuned to visitcoquitlam.ca for more updates! Do you have something to add to our list? Email tourism@coquitlam.ca.